Born in Mumbai, India, D’Souza came to the U.S. as an exchange student and graduated Phi Beta Kappa from Dartmouth College in 1983.

A former policy analyst in the Reagan White House, D’Souza also served as John M. Olin Fellow at the American Enterprise Institute and the Robert and Karen Rishwain Fellow at the Hoover Institution at Stanford University. He served as the president of The King’s College in New York City from 2010 to 2012.

D’Souza is married to Debbie D’Souza and together they have three grown children. 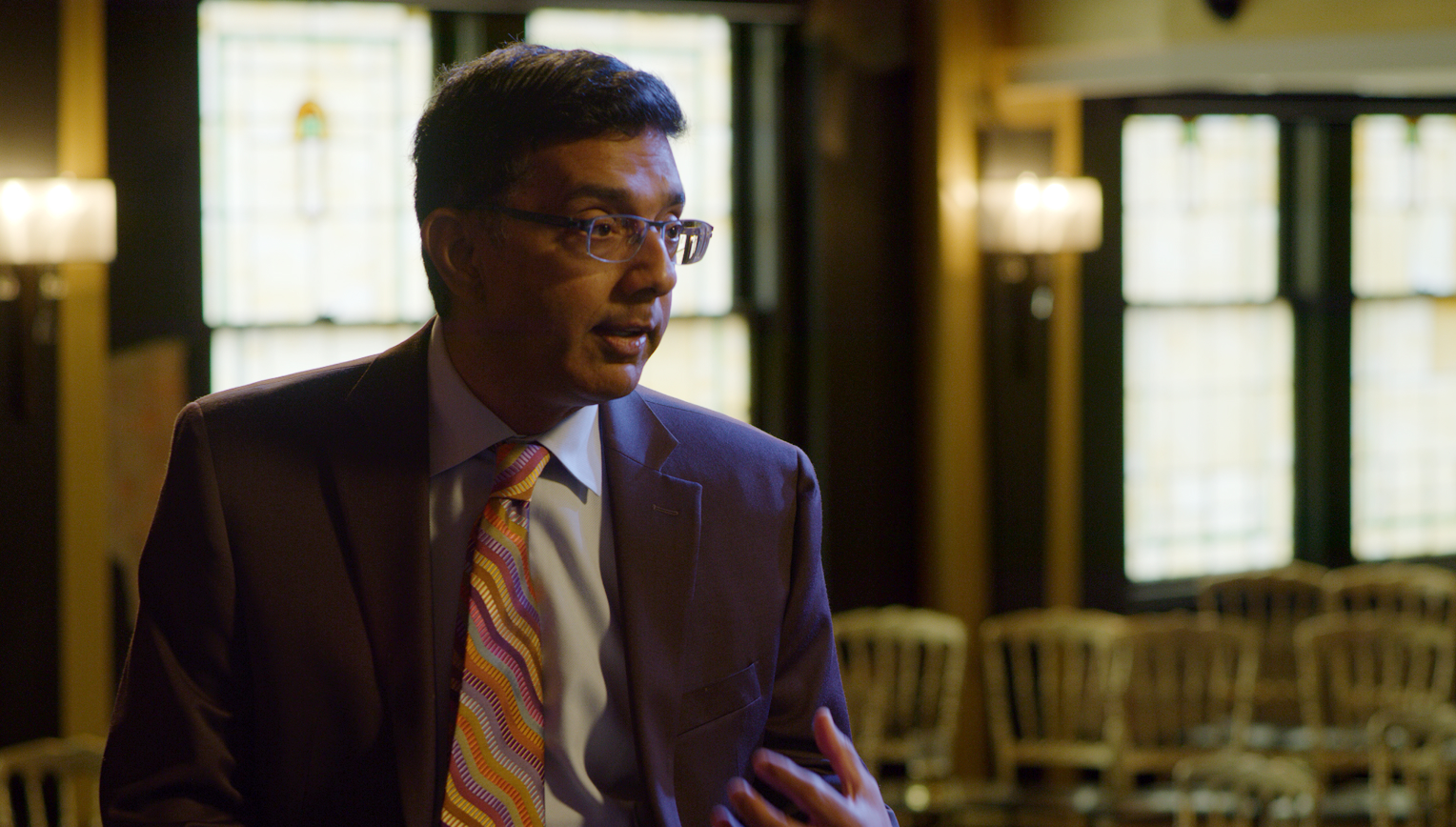 Called one of the “top young public-policy makers in the country” by Investor’s Business Daily, Dinesh D’Souza quickly became known as a major influencer on public policy through his writings. His first book, Illiberal Education (1991), publicized the phenomenon of political correctness in America’s colleges and universities and became a New York Times bestseller for 15 weeks. It has been listed as one of the most influential books of the 1990s.

In 1995, D’Souza published The End of Racism, which became one of the most controversial books of the time and another national bestseller. His 1997 book, Ronald Reagan: How an Ordinary Man Became an Extraordinary Leader, was the first book to make the case for Reagan’s intellectual and political importance. D’Souza’s The Virtue of Prosperity (2000) explored the social and moral implications of wealth.

In 2002, D’Souza published his New York Times bestseller What’s So Great About America, which anticipated the case that would need to be made for American exceptionalism and was critically acclaimed for its thoughtful patriotism. His 2003 book, Letters to a Young Conservative, has become a handbook for a new generation of young conservatives inspired by D’Souza’s style and ideas. The Enemy at Home, published in 2006, stirred up a furious debate both on the Left and the right. It became a national bestseller and was published in paperback in 2008, with a new afterword by the author responding to his critics.

Just as D’Souza is one of the nation’s most articulate spokesmen for a reasoned and thoughtful conservatism, he has also been an equally brilliant and forceful defender of Christianity. What’s So Great About Christianity (2008) not only intelligently explained the core doctrines of the Christian faith, it also explained how the freedom and prosperity associated with Western Civilization rest upon the foundation of biblical Christianity. Life After Death: The Evidence (2009) shows why the atheist critique of immortality is irrational and draws the striking conclusion that it is reasonable to believe in life after death. D’Souza’s latest foray into the debate over Christianity is his 2010 New York Times bestselling book, Godforsaken, in which he takes on the leading argument against Christianity: the pain and suffering critique of the faith.

In 2010, D’Souza wrote The Roots of Obama’s Rage, which was described as the most influential political book of the year, and set off a firestorm which ultimately led to D’Souza’s first film, 2016: Obama’s America. The film quickly rose to the second highest grossing political documentary of all time, easily passing Michael Moore’s Sicko and Al Gore’s An Inconvenient Truth. 2016 is also the #6 bestselling documentary of all time.

D’Souza’s second analysis of Obama came in his 2014 book, Obama’s America: Unmaking the American Dream, which climbed to #1 on the New York Times bestseller list and also influenced the 2016 film. In these two books, D’Souza makes the case that Obama’s agenda was in fact inherited from his father who harbored anti-colonial hatred toward the West.

This thesis about Obama’s motivations would prove to have predictive power in the coming years, anticipating Obama’s actions at home and abroad. Two years after the film’s release, D’Souza recorded this update.

2016 garnered national attention and was critical in the conversation leading up to the 2012 election. In fact, the film ruffled so many feathers that it led to D’Souza being personally attacked on the president’s website, BarackObama.com.

Undeterred, D’Souza continued his call for thoughtful patriotism with his 2014 #1 New York Times bestselling book, America: Imagine A World Without Her. In the book, he explores the landscape of a world in which America had lost the Revolutionary War. Is America a source of pride, as Americans have long held, or shame, as progressives allege?

The wild success of the book led to a film with the same name, which opened in theaters on the 4th of July, 2014 with an A+ Cinemascore rating.

In the fall of 2014, D’Souza found himself hauled into federal court for improperly donating money to a friend who was running for the Senate. D’Souza pleaded guilty, apologized for his offense, and was sentenced to eight months in a state-run confinement center near his home in San Diego. D’Souza’s prolonged exposure to the hardened criminal underclass provided an eye-opening education in American realities.

Applying the hardboiled perspective that he learned in confinement to American politics, D’Souza saw that America is becoming less exceedingly exceptional every day. Indeed, it is in danger of becoming just like India and other corrupt third world nations, run by gangs of kleptocrats.

In his 2016 book Stealing America, D’Souza explains how his experience in political captivity not only changed his life, but fundamentally transformed his perception of his adopted country. Stealing America was the catalyst for a new discussion in America about corruption in the Democratic Party has a favorability rating of 90% on Amazon.

The progressive crime syndicate described in Stealing America has found leadership in Barack Obama, Nancy Pelosi, and other Leftist thugs, but the lawless and slimy Hillary Clinton has always eyed the top spot for herself. In his next #1 New York Times bestselling book Hillary’s America (2016), D’Souza warned that after eight years of Obama, four years—or possibly eight years—of Hillary Clinton as president of the United States would so utterly transform America as to make it unrecognizable.

Stealing America and Hillary’s America provided the intellectual underpinning for D’Souza’s last film. The movie, titled Hillary’s America, was widely credited with playing a crucial role in defeating Hillary Clinton in the 2016 election after rising to #8 on the list of all-time most successful political documentaries, D’Souza’s third film in the top ten.

The film not only exposes Hillary Clinton for the corrupt liar she is, but also shows that she is just the latest in a long line of Democratic Party thugs trying to steal America’s wealth for themselves. Just as much about the secret history of the Democratic Party as Hillary Clinton’s corrupt candidacy, the film is more relevant now than ever as the Left pulls out its old playbook in an attempt to undermine President Trump.

D’Souza’s bestselling book is entitled The Big Lie: Exposing The Nazi Roots of the American Left. This Regnery Publishing book is D’Souza’s hard-hitting answer to the latest charge by the Left against President Trump and the Republicans: fascism. The reality is that there is a fascist threat in America—but it’s not Donald Trump. The real threat is from the Democratic Party.

Hitler coined the term “the big lie” to describe a lie that “the great masses of the people” will fall for precisely because of how bold and monstrous the lie is. In The Big Lie, D’Souza shows that the Democratic Left’s orchestrated campaign to paint President Trump and conservatives as Nazis to cover up its own fascism is, in fact, the biggest lie of all.

As D’Souza’s latest major film is being watched by patriots nationwide, his book with the same title is aimed at exposing the Left’s hypocrisy over fascism and racism. Death of a Nation presents the shocking story of the Democratic Party’s dark past, reinterprets the roles of figures like Van Buren, FDR and LBJ, and exposes the hidden truth that racism comes not from Trump or the conservative Right, but rather from Democrats and progressives on the Left.

Not since 1860 have the Democrats so fanatically refused to accept the result of a free election. That year, their target was Lincoln. They smeared him. They went to war to defeat him. In the end, they assassinated him. Now the target of the Democrats is President Trump and his supporters. The Left calls them racists, white supremacists and fascists. These charges are used to justify driving Trump from office and discrediting the right “by any means necessary.” Death of a Nation uses stunning historical recreations and a searching examination of fascism and white supremacy to cuts through progressive big lies and expose hidden history and explosive truths.

In D’Souza’s newest work, United States of Socialism, he unearths a well-founded argument that the socialism advanced today by the likes of Alexandria Ocasio-Cortez, Bernie Sanders, Ilhan Omar, and Elizabeth Warren is very different from the socialism of Lenin, Mao, and Castro. With D’Souza’s trademark incisiveness, wit, and originality, he makes the moral case for entrepreneurs, the free market, and the most effective political leader of the battle against socialism—President Trump.

The United States of Socialism is available now.

A HISTORY OF LEADING CIVIC DISCUSSION

D’Souza’s many endeavors—not to mention a razor-sharp wit and entertaining style—have allowed him to participate in highly-publicized debates about Christianity with some of the most famous atheists and skeptics of our time, including his late friend, Christopher Hitchens.

Most recently, D’Souza has partnered with Young America’s Foundation to bring a message of limited government, personal responsibility, and individual liberty to students all over America.

You can contact Dinesh via email or by sending him a message on Twitter and Facebook. Please note that because of the sheer volume of emails and messages, Dinesh is not able to respond to all inquiries.